As we promised in our previous post, here are some photos of the Cranes that we spotted at La Janda. We also saw some Purple Gallinule so we've also included a photo of that bird for you to view. 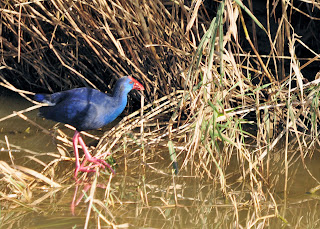 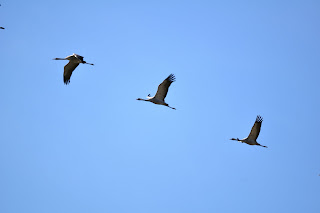 We took a day off work to pop over to La Janda. We were expecting to see Cranes, as they tend to appear in these areas during the winter months. Luckily we were there for no longer than 10 minutes before we heard their calls across the field. We stopped off and managed to view a flock of approximately 300 that were there resting and feeding so we were able to observe them closely for some time. As they were relatively far away from us we were unable to take any decent photographs but we hope to be able to capture a good one at some point! Whilst we were stopped off observing the Cranes we glimpsed a Black-winged Kite and a couple of Hen Harriers.

Apologies for the short post but we simply went on a quick trip to La Janda to see if the Cranes were there. We hope to add more to the blog soon enough so please click to suscribe to the blog and you'll be notified of any new posts in the future.
Posted by Dutch at 22:32 No comments:

After several attempts we finally got organized and planned a trip down to the area known as the 'El Brazo del Este'.

El Brazo del Este is located 20km south of Seville in the Guadalquivir river estuary, which is an area with one of the highest levels of biodiversity in the Iberian peninsula. This former branch (brazo) of the Guadalquivir is east (este) of the river and is now a reed-fringed lagoon and wetland area surrounded by rice plains and farmland.

To view the area properly you will definitely need a car as there's a lot of ground to cover. We decided to drive along, stop in certain areas of interest and look around with our bino's. El Brazo del Este is renowned for its bird population so we were in no doubt that we'd come across several bird species, it was just a matter of patience.

As you can see below, it was a successful outing!